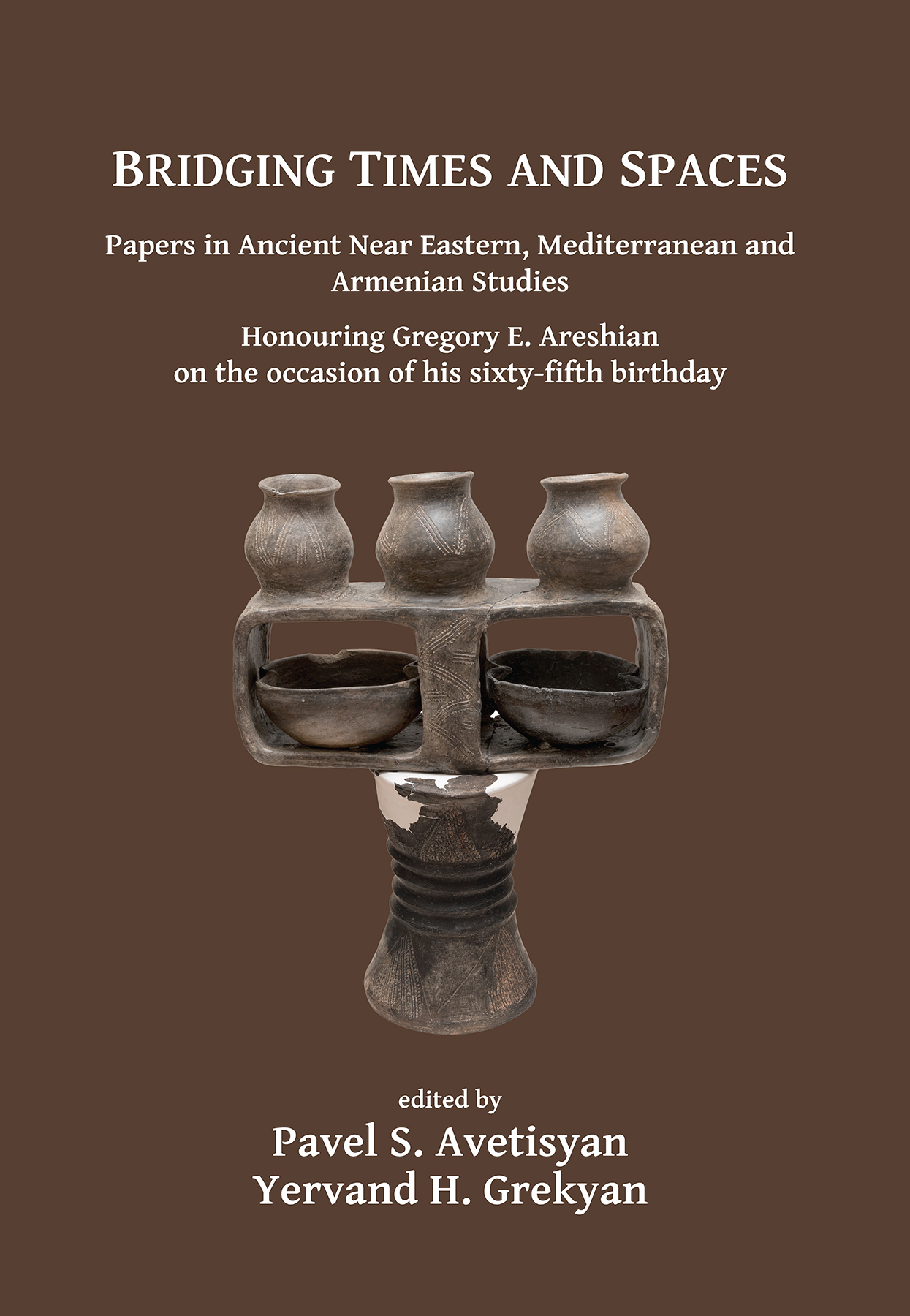 Illustrated throughout in colour and black & white

Bridging Times and Spaces: Papers in Ancient Near Eastern, Mediterranean and Armenian Studies

Honouring Gregory E. Areshian on the occasion of his sixty-fifth birthday

This book presents papers written by colleagues of Professor Gregory E. Areshian on the occasion his 65th birthday. The range of topics includes Near Eastern, Mediterranean and Armenian archaeology, theory of interpretation in archaeology and art history, interdisciplinary history, historical linguistics, art history, and comparative mythology.

Bridging Times and Spaces is composed of papers written by colleagues of Professor Gregory E. Areshian on the occasion his 65th birthday reflecting the breadth and diversity of his scholarly contributions. The range of presented papers covers topics in Near Eastern, Mediterranean and Armenian archaeology, theory of interpretation in archaeology and art history, interdisciplinary history, historical linguistics, art history, and comparative mythology. The volume opens with an extensive interview given by Gregory Areshian, in which Gregory outlines the pathways of his academic career, archaeological discoveries, different intellectual quests, and the organic connections between research questions that he explored across different social sciences and the humanities, stressing the importance of periodizations in interdisciplinary history as well as his views on holism and interdisciplinary studies.

Foreword – by Pavel S. Avetisyan and Yervand H. Grekyan; Of Pathways Taken and Not Taken: between Archaeology, History, and Interdisciplinarity - An Interview with Gregory E. Areshian Conducted by Levon H. Abrahamian and Emily Uyeda Kantrim; Menhirs of Harzhis – by Hayk Avetisyan, Artak Gnuni, Arsen Bobokhyan and Henrik Danielyan; The Kurgans of Gegharot: A Preliminary Report on the Results of the 2013-14 Excavations of Project ArAGATS – by Ruben S. Badalyan and Adam T. Smith; Capacity Marks on Depata from Troy – by Arsen Bobokhyan; Iconology in the Light of Archaeological Reason – by Giorgio Buccellati; Doctrinal Union or Agreement to Disagree? Armenians and Syrians at the Synod of Manazkert (726 CE) – by S. Peter Cowe; A Note on the ‘Great King of Armenia’ – by Touraj Daryaee; The Study of East Asian Art History in Europe: Some Observations on Its Early Stages – by Lothar Von Falkenhausen; The Settlement Size and Population Estimation of the Urartian Cities – by Yervand H. Grekyan; Achaemenids and the Southern Caucasus – by Michael Herles; Quarlini – Teišebaini – Kavakert – Karmir Blur – by Simon Hmayakyan, Mariam Melkonyan and Armine Zohrabyan; Wine in Libation Ritual – by Suren Hobosyan; Two Types of Nominal Compounds in Archaic Indo-European Anatolian Names and Words in the Old Assyrian Documents from Asia Minor (XX-XVIII c. BC) – by Vyacheslav V. Ivanov; New Insight into the Agglomerated Houses/Agglomerated cells in Armenia: Arteni, Aragats Massif – by Irena Kalantaryan, Bérengère Perello and Christine Chataigner; Political Economy of Carthage: The Carthaginian Constitution as Reconstructed through Archaeology, Historical Texts, and Epigraphy – by Brett Kaufman; Excavations of the Cave Settlement of Ani – by Hamazasp Khachatryan; The Emergence of Burial Mound Ritual in the Caucasus, the 5th-4th Millennia BC (Common Aspects of the Problem) – by Sergei N. Korenevskiy; A Note on Hittite Toponymy: the Case of Pittiyariga – by Aram Kosyan; Fortified Kura Arax Settlements in North-Western Iran – by Ernst Stephan Kroll; From Aramus to Sevaberd, on the Gegham Mountain Route – by Walter Kuntner, Sandra Heinsch-Kuntner and Hayk Avetisyan; Royal Capital: Gagik I Bagratuni and the Church of Gagkašēn – by Christina Maranci; Notes on Anatolian Loanwords in Armenian – by Hrach Martirosyan; Main Results of the Excavations at the Fortress of Getap in 2009-2014 – by Husik Melkonyan, Inesa Karapetyan and Hasmik Margaryan; ‘Proto-Iliad’ in the Context of Indo-European Mythology – by Armen Petrosyan; The Sale and Lease of Vineyards in Media Atropatene – by Daniel T. Potts; Greek and Anatolian Parallels of Palatalization – by Jaan Puhvel; Notes on the Representation of the Face of Cyrus the Great – by David Stronach; Probable Reasons for the Occurrence of Comparable Abstract and Figurative Designs in the Art Inventories of Different Ancient Cultures Since Prehistory – by Jak Yakar; The Early Bronze Age Shrine of Mets Sepasar – by Larisa Yeganyan; The Agriculture of Western Syunik, Armenia in the Light of Archaeological and Archaeobotanical Data (Preliminary Study on the Economy of Early Yervandid Settlements) – by Mkrtich H. Zardaryan and Roman Hovsepyan

Pavel Avetisyan is a former student of Gregory Areshian during his study at the Yerevan State University in 1975-1980; he now leads together with Gregory and Kristine Martirosyan-Olshansky the joint Armenian-American archaeological team at the excavations of the Neolithic settlement at Masis Blur, Armenia. Pavel received his PhD in 2003 (Chronology and Periodization of the Middle Bronze Age of Armenia) and D.Sc. in 2014 (Armenian Highland during the 24-9th centuries BC. The Dynamics of Socio-Cultural Transformations, according to Archaeological Data). His areas of research are Old World archaeology and the Neolithic and Iron Age cultures of Transcaucasia, devoting his studies also to the periodizations and chronology of the Bronze and Iron Ages of Transcaucasia. Professor Avetisyan is the Director of the Institute of Archaeology and Ethnography, National Academy of Sciences of Armenia and Professor at the Yerevan State University. Yervand Grekyan is a leading researcher at the Institute of Oriental Studies, National Academy of Sciences of Armenia and Associate Professor at the Armenian State Pedagogical University. He received his PhD in 2002 (History of the Mannean Kingdom) and defended his habilitation thesis on the structure of the Urartian Kingdom at the Institute of Archaeology and Ethnography, National Academy of Sciences of Armenia in 2016 (Biainili-Urartu. State and Society). Dr Grekyan’s interests are ancient history and culture of the Near East and especially of the Armenian Highland in the Late Bronze and Iron Ages.