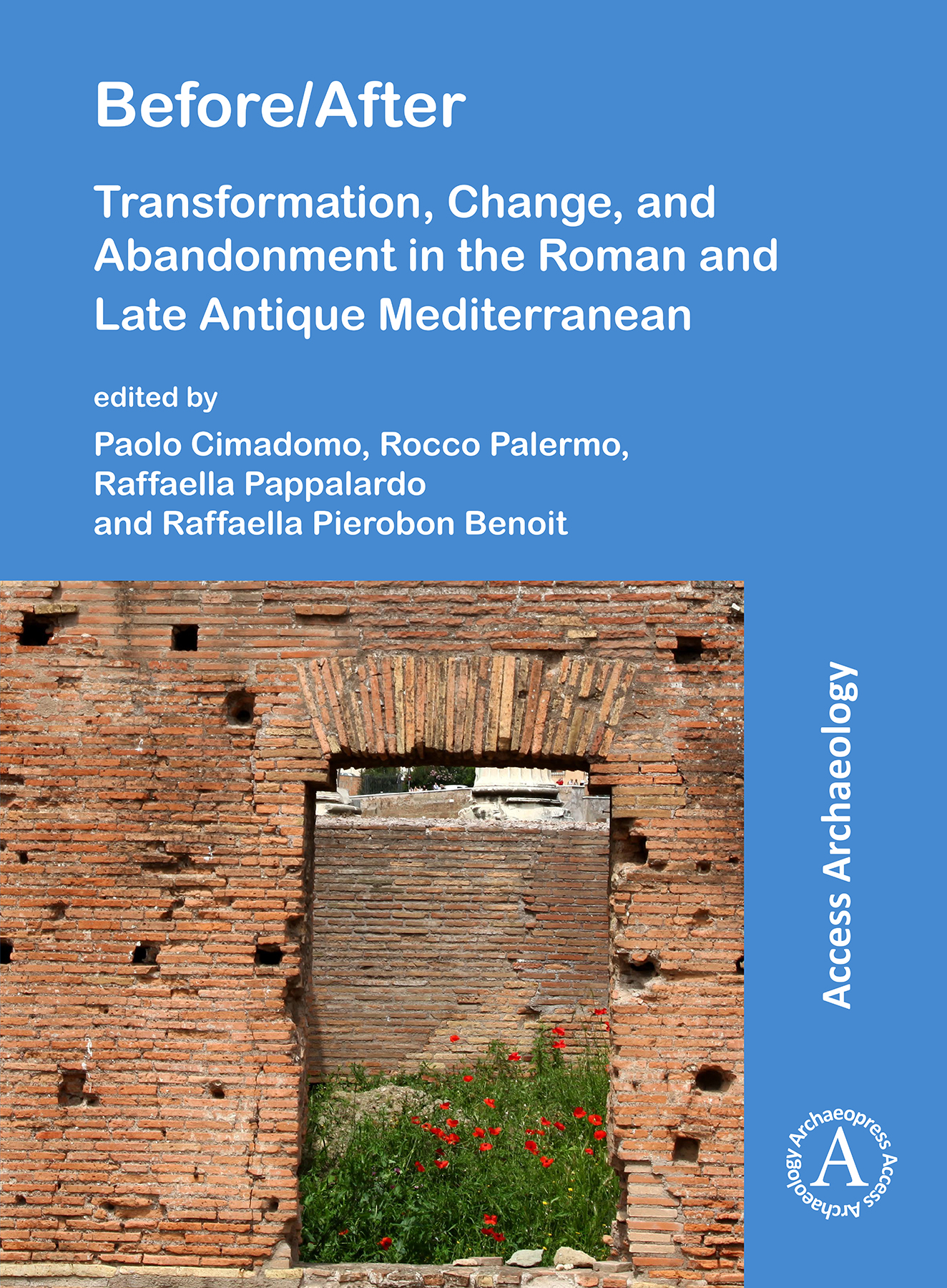 Before/After: Transformation, Change, and Abandonment in the Roman and Late Antique Mediterranean

The result of a workshop held at the Theoretical Roman Archaeology Conference (2016), this book explores various aspects related to transformation and change in the Roman and Late Antique world, from the evolution of settlement patterns to spatial re-configuration after abandonment processes.

Before/After explores various aspects related to transformation and change in the Roman and Late Antique world through the archaeological and historical evidence. The seven chapters of the volume range from the evolution of settlement patterns to spatial re-configuration after abandonment processes. Geographically the volume aims to cover – through case studies – the enlarged Roman world from Spain, to Cyprus, from the Rhine area borderland to the Red Sea. The book is the result of a workshop organized as part of the Theoretical Roman Archaeology Conference, held in Rome during March 2016.

Introduction (Editors) ;
Crisis or Transformation: the Effects of the ‘Third Century Crisis’ in the Layetania Interior. An Example from the Hispania Citerior Tarraconensis – J. O. Guzman ;
The Abandonment of Myos Hormos – D. Nappo ;
Hydrological Change and Settlement Dislocation along the Later Roman Rhine – T. V. Franconi ;
Abandoned but not forgotten. Dynamics of Authority Negotiation in the British Sacred Landscape – A. Esposito ;
Contesting Sacred Landscapes: Continuity and Abandonment in Roman Cyprus – G. Papantoniou ;
Abandonment and Revival between Late Antiquity and the Early Middle Ages: Facts and Fiction – A. Vionis ;
Investigating Transformations through Archaeological Records in the Heart of Tuscany. The Roman Villa at Aiano between Late Antiquity and the Early Middle Ages (4th-7th c. AD) – M. Cavalieri

Paolo Cimadomo is a Post-Doc Research Fellow at the University of Naples ‘Federico II’ (Italy). His main research interests are the Hellenistic and Roman Near East. He has worked in different areas of the Eastern Mediterranean (Israel, Jordan, Syria, Turkey) and is the author of The Southern Levant during the first centuries of the Roman rule (64 BCE-135 CE) (Oxbow Books, 2019) ;

Rocco Palermo is a Researcher and Lecturer at the University of Groningen (Netherlands), and Associate Director of the Erbil Plain Archaeological Survey (Iraqi Kurdistan, Harvard University). He has carried out extensive fieldwork in the Middle East (Syria, Jordan, Iraq), where he explores the formation and development of imperial landscapes through the archaeological record. He is the author of On the Edge of Empires. North Mesopotamia during the Roman Period (Routledge, 2019). ;

Raffaella Pappalardo obtained her PhD in Ancient History from University of Naples ‘Federico II’ (Italy). As a pottery specialist she has taken part in many archaeological projects in Syria, Turkey, Jordan and Lebanon, where she was in charge of the ceramic assemblages. Her publication record reflects her interest in the socio-cultural role of pottery in the ancient world, and specifically in the period between the Late Antique and the Islamic world. ;

Raffaella Pierobon Benoit is associate member of Arts and Sciences Academy of Naples (Italy), and was Professor of Archaeology of the Roman Provinces at the University of Naples ‘Federico II’ until 2015. She has carried out extensive fieldwork in Italy and directed archaeological projects in France (Anderitum/Javols) and Turkey (Mandalya Gulf Survey). She was Associate Director of the Italian Archaeological Expedition at Tell Barry (Syria) from 1989 to 2004, and Project Director since 2005.

The volume succeeds in its stated aim of collecting ‘precise analysis of specific case studies’ (p. vi) and is an important reminder that close study of the available data is key to understanding the causes of change, both on local and on regional scales.